1. 3.7 million students in the USA are homeschooled.

Homeschooling in the USA is a lot more popular than people may think, and the number of homeschooled children is ever-increasing. More and more parents are refusing to send their kids to school. Instead, they choose to educate them at home. The primary reasons might be dissatisfaction with the quality of teaching and safety concerns.

According to homeschool statistics, there are 3.1 million homeschoolers as of 2021. This outstanding figure shows that there are 6%–7% of homeschoolers in the USA. Compared to the previous year, the stats show a growing trend — approximately 2%–8% per year.

Homeschooling is becoming immensely popular among all races, but the majority of homeschooled children are white; 5% are black, 7% are Hispanic, and 2% are Asian or Pacific Islander, according to homeschool demographics. It’s essential to mention that homeschooling knows no boundaries. Many parents decide to homeschool their children. Religion doesn’t play a significant role here because both atheists and believers opt for home education.

Social status is also unimportant as you can find members of all classes — low, middle, and high. Lastly, political background and education also don’t affect the deciding to homeschool children, as both conservatives and liberals do so.

3. 5.7 million American children were homeschooled at some point.

4. 83% of homeschooled children are white.

According to homeschooling statistics, a large number of white American students are homeschooled (83%). The percentage of other races is significantly smaller. Only 2% of Asian, 5% of African-American, and 7% of Hispanic students are home educated. The demographics reveal that 34% live in suburban areas, while 31% live in rural locations; 28% are based in cities and 7% in towns. 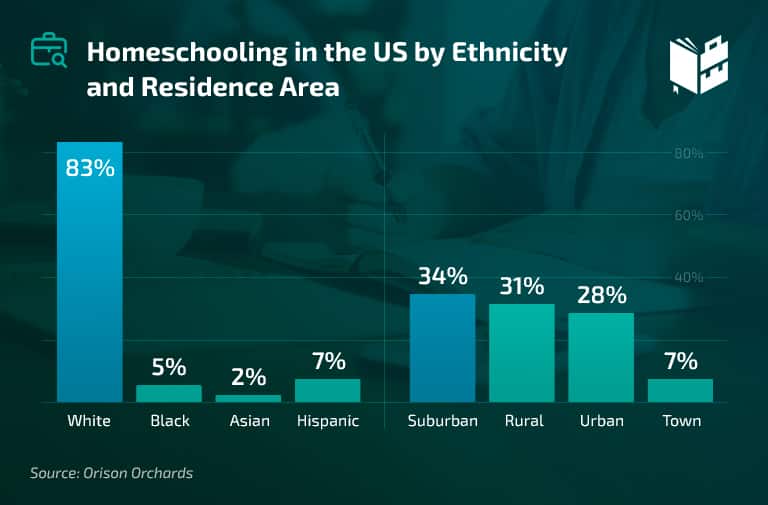 What Is the Percentage of Homeschooled Students Who Go to College?

Contrary to what many people may think, students who are educated at home do continue their education at colleges and universities. In fact, they tend to achieve better results and higher scores on assessment tests than their peers who attended public or private schools.

5. 25% of homeschoolers’ parents have a bachelor’s degree.

Regarding homeschoolers’ parents’ education, national homeschooling statistics indicate that homeschooled students come from families with different education levels. 11% didn’t graduate from high school, as opposed to 20% who finished secondary education or obtained a GED. 30% of parents underwent some college training, while 25% received a bachelor’s degree. 14% completed graduate or professional school.

6. Homeschooled students make up 3.4% of the school-age population.

Homeschooling became officially approved in all 50 states back in 1993. Six years later, approximately 850,000 students were homeschooled. That number rose to 1.1 million in 2001, accounting for 2.2% of the entire student population.

2007 witnessed another increase, this time by 0.7%, resulting in 1.5 million students. Statistics from 2012 showed that the overall number of homeschoolers in the US amounted to 1.77 million children educated at home, accounting for 3.4% of the American student population.

The COVID-19 pandemic saw a rapid increase in homeschooling. In fact, last year witnessed a whopping 2.5 million students being educated at home. This figure accounted for 3%–4% of the total number of schoolchildren.

7. Homeschoolers have 15–30 percentile points more than their peers on standardized academic achievement tests.

Homeschooling data reveals that children who are educated at home have much better results on standardized achievement tests than their peers who go to regular schools. This particularly applies to students educated by parents who may or may not have formal education or a diploma and are on a broad income spectrum. Such results indicate that parents’ background has little to no impact on the quality of home education.

8. Homeschoolers obtain 72 points more (out of 1600) than the national average on the SAT.

According to homeschoolers in college statistics, students educated at home show better results on college entrance tests. More precisely, they scored 72 points more on the Scholastic Aptitude Test (SAT) than the national average. Similarly, they obtained 22.8 out of 36 points on the American College Test (ACT), compared to the national average of 21 points.

9. Students educated at home graduate from a college at a 66.7% rate.

Homeschoolers show considerable homeschool success rates. The University of St. Thomas conducted a study that revealed that homeschoolers graduate from a college at a nearly 10% higher rate than their peers who finished regular public high school (57.5%). The study also found that homeschoolers applied to college with an average of 26.5 composite ACT, compared to students from regular schools who had a 25 composite. Besides, homeschooled students continually earned a greater GPA compared to other students.

What Education Level Do Homeschooling Parents Have?

Homeschooling statistics on the proportion of different ethnicities of people who engage in home education show white people are, by far, the biggest proportion of homeschoolers in America.

Further, about 40% of the parents gave as a reason that they want to “give the child more instruction on African American/black culture and history” and 20% said another reason they chose homeschooling is that they “desire to avoid racism in public schools.”(Ray 2017, p. 609).

…while African American homeschooling practices vary widely based on parents’ teaching and learning philosophies and ultimate objective, a common tendency is the implementation of a curriculum inclusive of African/African American history and culture. (Ama Mazama, 2015)

Perhaps this isn’t surprising considering children learn much better when they have one-on-one tutors as opposed to high student to teacher ratios. They also learn better if they don’t have to deal with a host of other influences that eat away their mental strength throughout the day (peer pressure, racism, exhaustion and so on).